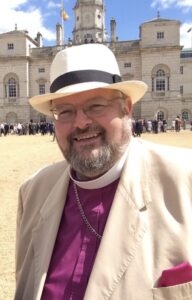 Bishop Damien was born in 1968 in Chatham, Kent and raised in Canterbury. He entered Christian Ministry in 1990, serving congregations in London and Whitstable before joining the Anglican Catholic Church (ACC) in January 1999. After he received ordination, sub-conditione, in the ACC in June 1999, he served as Parish Priest of Our Lady of Walsingham and St Francis of Assisi, Rochester, Kent and then, in May 2005 he established this parish in the City of Canterbury. In November 2001 he was appointed as Diocesan Dean, this was followed in April 2004 by his appointment as Diocesan Vicar General.

In March 2008 the Electoral Synod of the Diocese of the United Kingdom elected, the then, Father Damien to become the next Bishop of our Diocese. This election was ratified by the Metropolitan Archbishop and the College of Bishops of the Original Province around the world, and he was duly consecrated as a Bishop and appointed and enthroned as the Second Bishop Ordinary of the Diocese of the United Kingdom, on 20th September 2008.

Bishop Mead, as with all ACC Clergy in our Diocese is bi-vocational and non stipendiary. In his secular career he has, since August 2000, worked as Chairman of the Board of Directors of Credo Care Limited, an Independent Fostering Agency specialising in the care of children and young people with disabilities and complex medical needs.  Prior to that he worked in retail and residential social work. Bishop Mead holds a Diploma in Theology and a Fellowship in Theology from Victoria College, London. In October 2020 he had conferred upon him an Honorary Doctor of Divinity (Hon.DD) by the Johann Heinrich Pestalozzi Christian University, in Miami, Florida, USA. He is a long standing member of the British Institute of Directors. He is a Life member of the Royal Society of St George, A Life Member of The Society for the Protection of Unborn Children and a Life Member of the Guild of All Souls. He is serves as Chairman of the Kent Branch of the Constitutional Monarchy Association and  He is also a Member of the Royal British legion and the Royal National Lifeboat Institute.

In August 2021 he was appointed an Officer in the Order of St George  and in January 2022 was informed by the Grand Prior that he was to be elevated to Knight of the Order with the investiture to be held in May 2022 in Rochester Cathedral.

On 23rd February 2022, Bishop Mead was recognised by Andy Beshear, the Governor of the Commonwealth of Kentucky, USA,  for his philanthropic work, especially in the provision of foster care for disabled children, and  commissioned him, Honourable Damien Mead, Kentucky Colonel and aide-de-camp to the Governor.

In August 2022 he became the 25th Lord of the Manor of Eastbourne Medsey (formerly Meades), Sussex.

Bishop Damien lives on the Romney Marsh in Kent and in addition to his Church work and work for Credo Care Ltd is kept busy with his two Miniature Jack Russell dogs, Daisy and Minnie, and also keeps chickens. 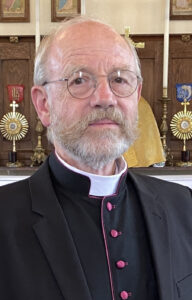 Father Ray  was received into the ACC in 2000, having been a Lay Reader in the Church of England for more than 30 years. He was ordained deacon in 2001 and priested the following year. He served as curate at Our Lady and St Francis, Rochester until becoming parish priest there in 2003, a post he held for 11 years.

In 2008 he was appointed as Dean of the Southern Deanery and in 2011 became Archdeacon. Both of these positions were retained after his retirement from parish responsibilities in 2014. He also acts as the area chaplain to the ACC Fellowship ministering to any who are unable to get to church. In 2019 the Bishop appointed him as Chairman of the Board of Ministry. In February 2022 the Bishop confirmed Fr Ray’s appointment as Diocesan Vicar General and at the same time announced he was to step down as Dean of the South.

Fr Ray spent most of his working life in the printing industry, mainly as a proof reader, and these skills are often put to good use within the Diocesan office.

Having assisted at St Augustine’s on a regular basis for several years the decision was made that he should be added to the staff in an official capacity.

Fr Ray was awarded an Honorary Masters’ Degree in Ministry from the Johann Heinrich Pestalozzi Christian University, Miami, holds a Fellowship Diploma in Theology from Victoria College, London, and has also been awarded Fellowships from the Fraternity of St Cecilia, The Guild of Musicians and Singers, The Faculty of Liturgical Musicians at JHPCU, The Cotswold Society of Church Musicians, The National Federation of Church Musicians, and is an Associate of the Guild of St Teilo.

He lives on the Isle of Sheppey and has a large family with six children, six grandchildren, and a great-grandson, who help to keep him occupied! 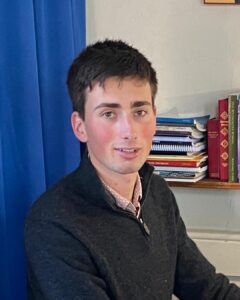 From All Saints day (1st November 2020) Louis joined us as our permanent organist at St Augustine’s. Organs also feature In his “day” job – he works for a long established firm of organ builders in Kent. 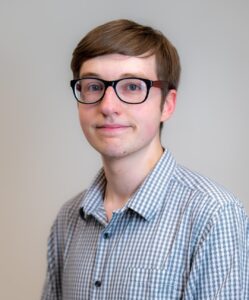 From the Fourth Sunday in Lent, (14th March 2021). Barnabas joined us as Cantor. He is a graduate musician with a Masters degree in Composition. A regular performer as well, Barnabas is a baritone singer and pianist with special interests in modern experimental and theatrical music as well as composing and premiering his own works. 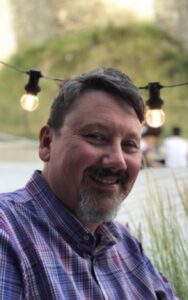 Roy is one of the founding members of our parish. He is also our Safeguarding Officer and also an Altar Server at St Augustine’s. In his work outside church he is a Company Director and Social Worker. 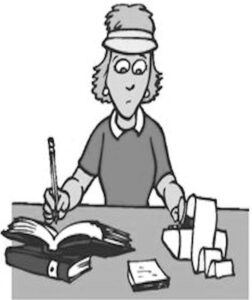 Kerry, who also assists with the keeping of the Diocesan Accounts, works as a self employed Bookkeeper. 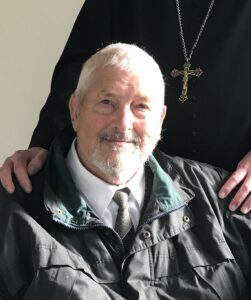 An invaluable support and source of advice. 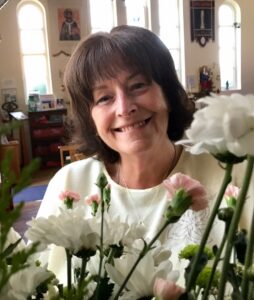 Margaret is also responsible for the beautiful flower displays which so often adorn our sanctuary. 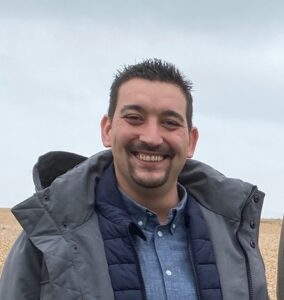