The Anglican Catholic Church of St Augustine was formed in May 2005. Originally meeting at Canterbury City Cemetery Chapel. (Pictured below left) 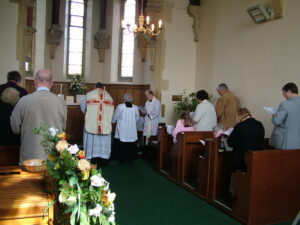 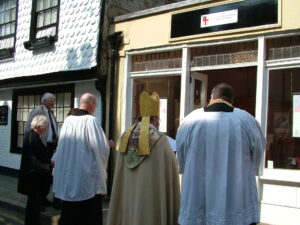 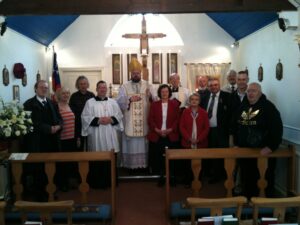 On Low Sunday, 15th April 2007, Bishop Rommie Starks, Episcopal Visitor to the Diocese of the United Kingdom, formally blessed and dedicated a Chapel in the City Centre (within sight of Canterbury Cathedral) – just off the High Street. (Pictured above middle and right) in Best Lane. A former non conformist place of worship reclaimed from secular use and dedicated to our patron, St Augustine – the first Archbishop of Canterbury. This was a lease hold property which we were to occupy for the next ten years. 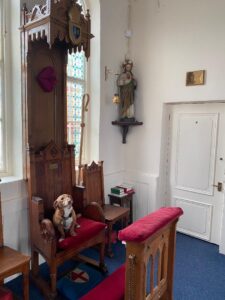 Our Parish received a great honour in 2008 when our Priest in Charge, Father Damien Mead, was consecrated on 20th September as the Bishop Ordinary of the Diocese of the United Kingdom. Remaining as Rector of our Parish meant that our little Church became the Pro-Cathedral of our Diocese.

What is a pro-cathedral? In the briefest of explanations it  is a church used as a cathedral by a bishop until a more permanent or suitable church is built. Its rights and privileges are identical with those of a cathedral. It is not unusual. In London for example, the Roman Catholic Church of Our Lady of Kensington, London, was the pro-cathedral of the Archdiocese of Westminster for nearly thirty-six years until Westminster Cathedral in London was opened in 1903.

But aren’t you too small? Sometimes describing our tiny little church building as a  pro-cathedral elicits laughter or confusion. Strictly speaking a cathedral is simply the building within which one finds the bishops ‘cathedra’ – his chair or throne. Here at St Augustine’s you will find bishop Damien’s cathedra in the Sanctuary, on the Gospel side of the Altar (that is the left had side, as you look towards the Altar).

In the photo on the right you can see Bishop’s Damien’s old dog, Toby, sitting in the place of honour! 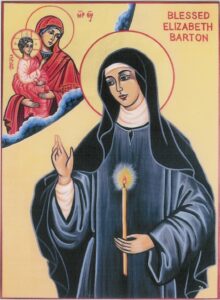 Also in 2008 Bishop Mead commissioned an Icon of a local Kentish Saint, Blessed Elizabeth Barton, known as the ‘Maid of Kent’ or “Nun of Kent” who was a Benedictine nun at St. Sepulchre’s Convent in Canterbury (the area is now known as Nunnery Fields).

Blessed Elizabeth had visions of the Blessed Virgin Mary and was martyred on the orders of Henry VIII on 21st of April, 1534. The Icon and its story has been featured in Local Newspapers and on BBC Radio Kent. We believe it to be the only such depiction of Blessed Elizabeth Barton in the world. Bishop Starks (mentioned above) blessed the Icon on Easter Day 2008.

Relic of the Veil of the Blessed Virgin Mary 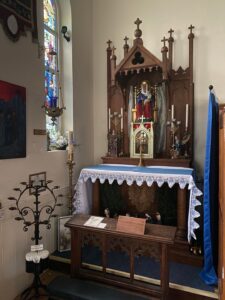 On the Feast of the Assumption, 15th August 2009, Bishop Mead blessed the Relic House within which he placed the Relic of the Veil of the Blessed Virgin Mary. 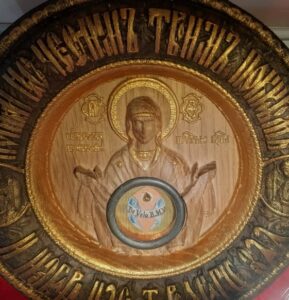 closed convent in Belgium. It was accompanied by a document of authentication dated 1909. On Sunday 2nd February 2020 the Bishop blessed the installation of our Relic of the Veil of the Blessed Virgin Mary in a new reliquary. Hand carved in the Ukraine from oak and fashioned as an icon of The Protection of the Theotokos, we now have a suitable holder for veneration of the relic. 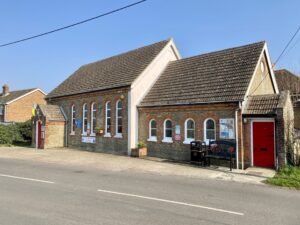 In October 2017, following a lengthy process, the congregation completed the purchase of our very own building. The former Whitehill Methodist Church & Champion Hall, in the village of Painters Forstal, Near Faversham. This New building is 15 minutes drive from Canterbury.

Services in the Chapel in Best Lane, Canterbury, ceased on the last Sunday in November 2018.

The purchase of the building was made possible by a generous legacy and by the determination and commitment of our small congregation. Extensive work was undertaken in converting the new building. 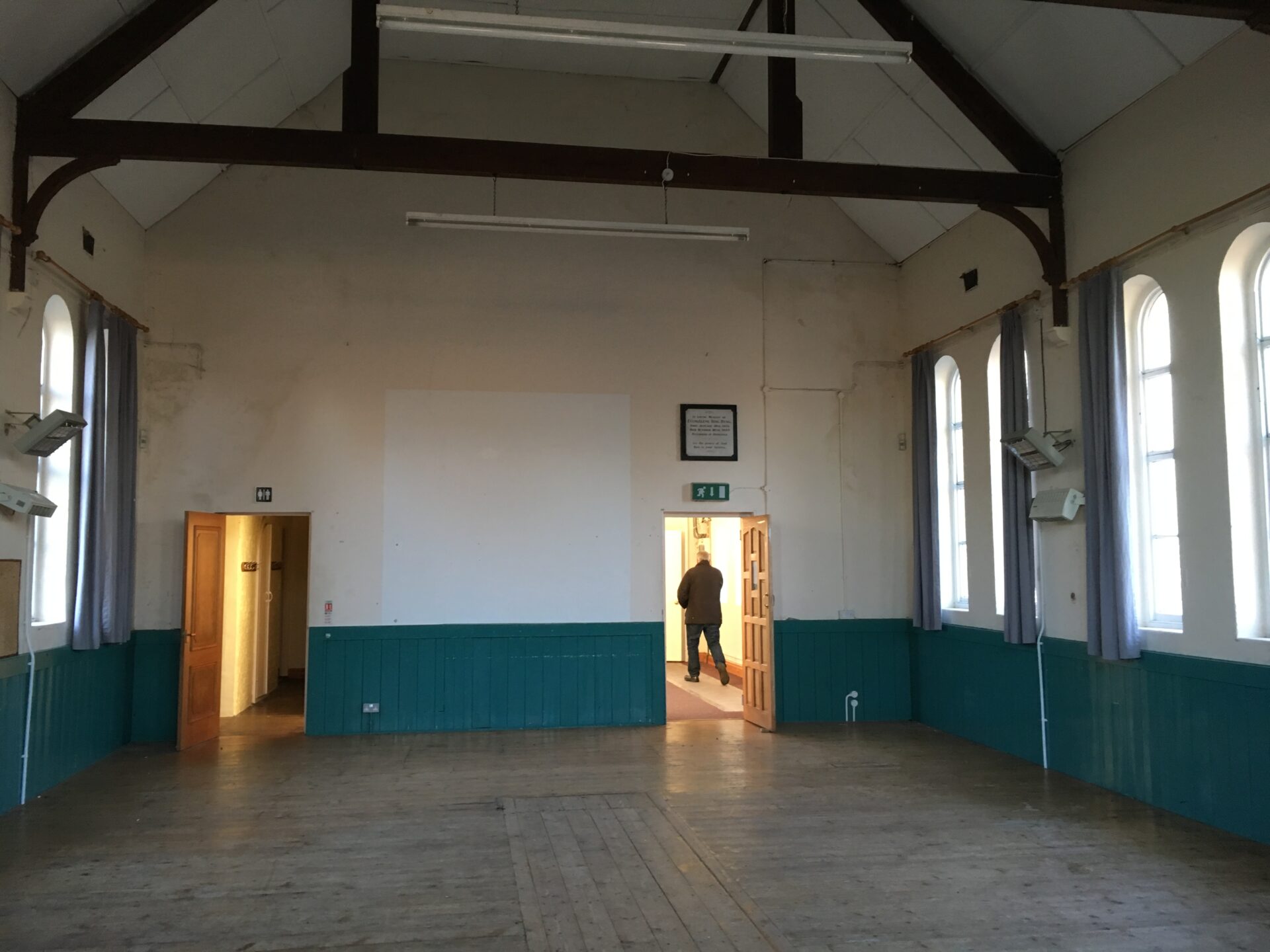 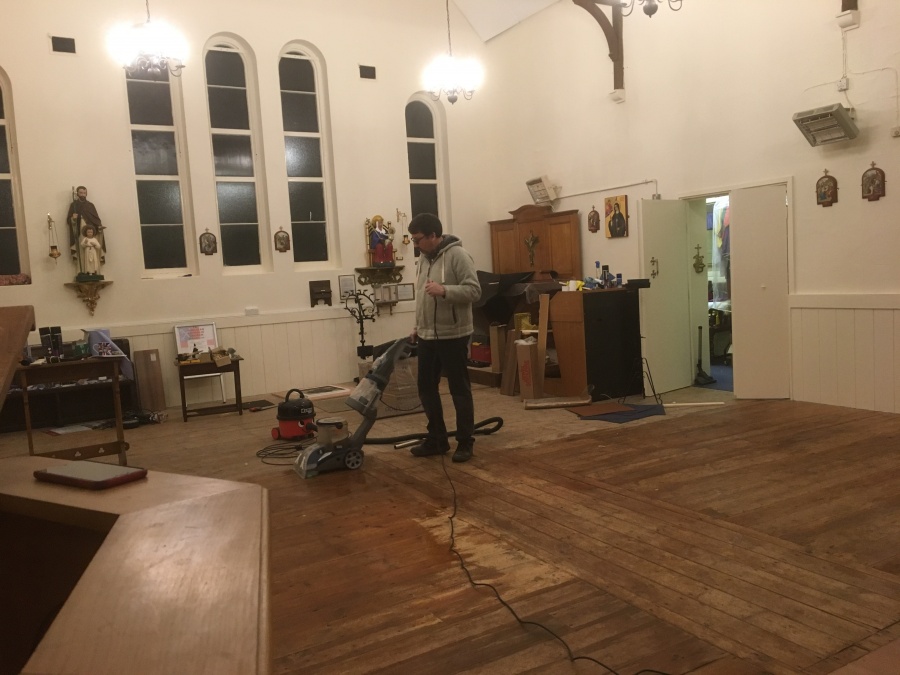 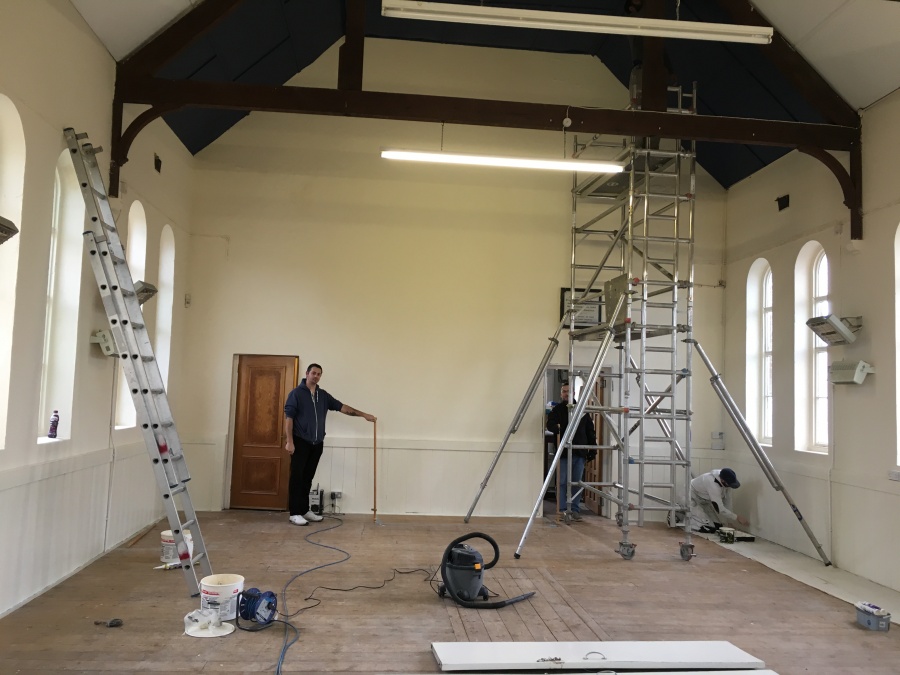 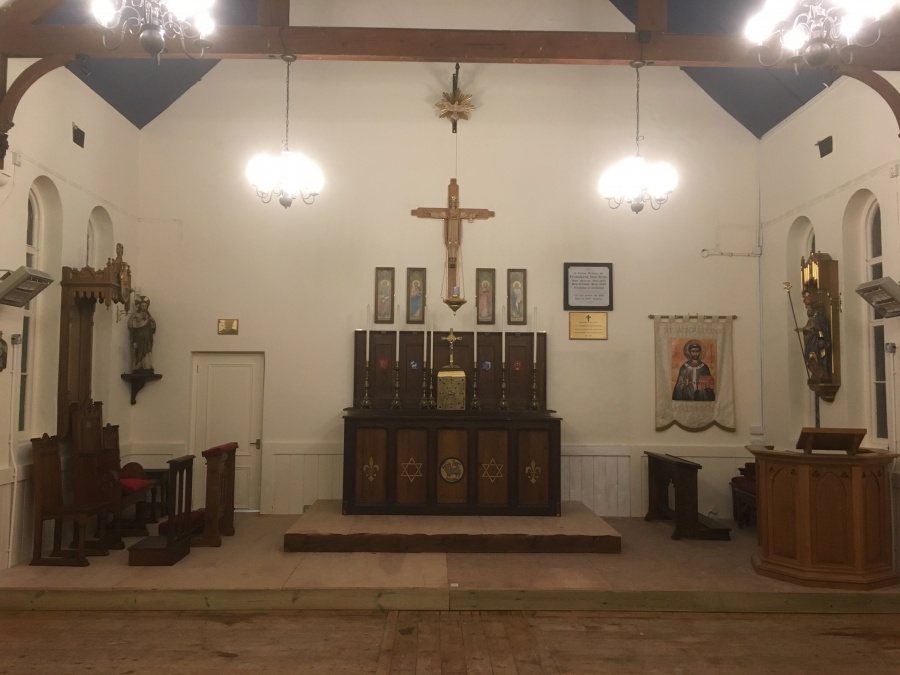 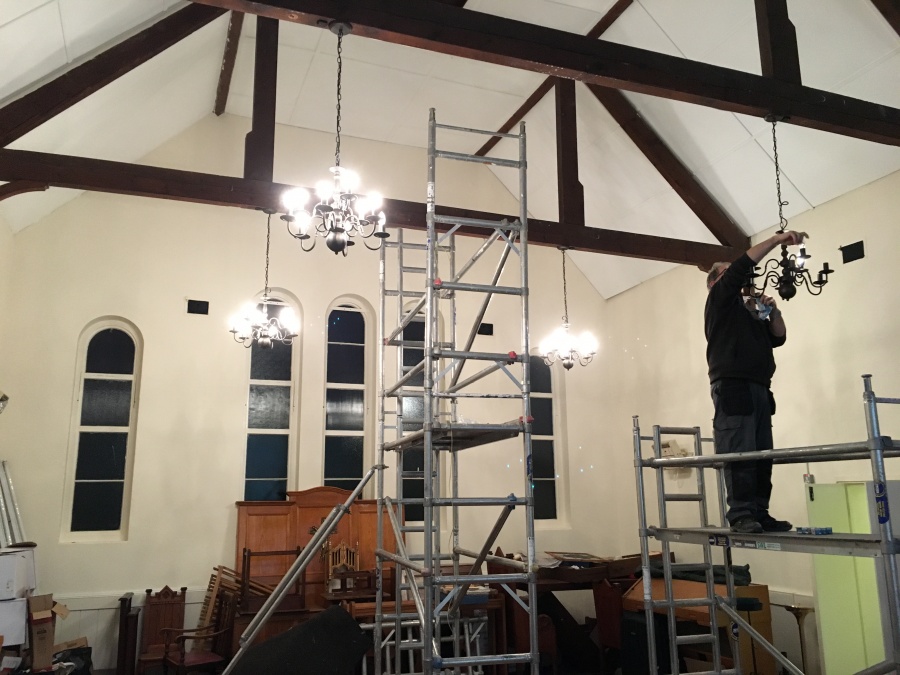 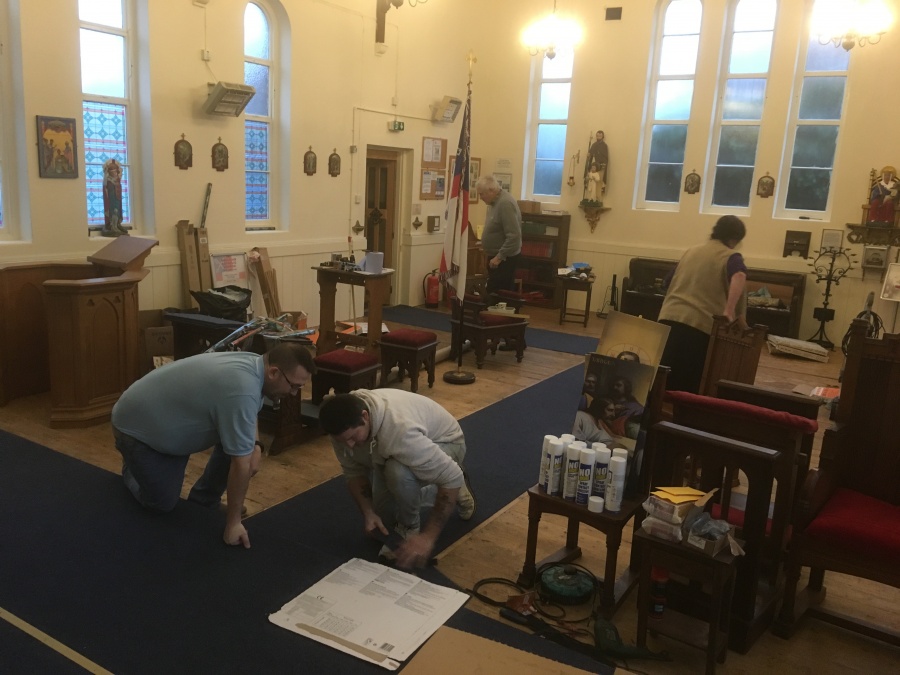 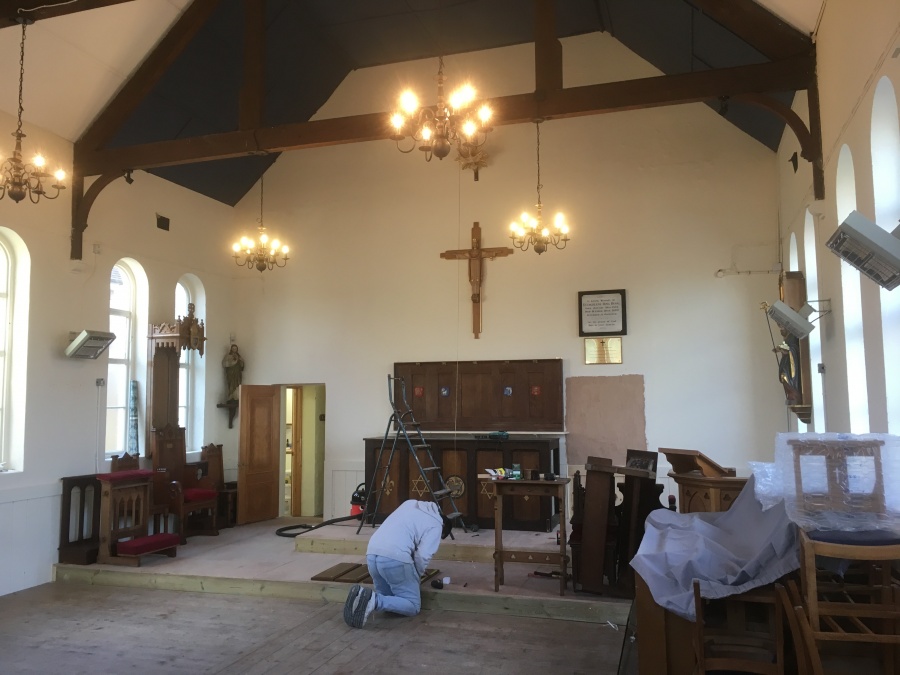 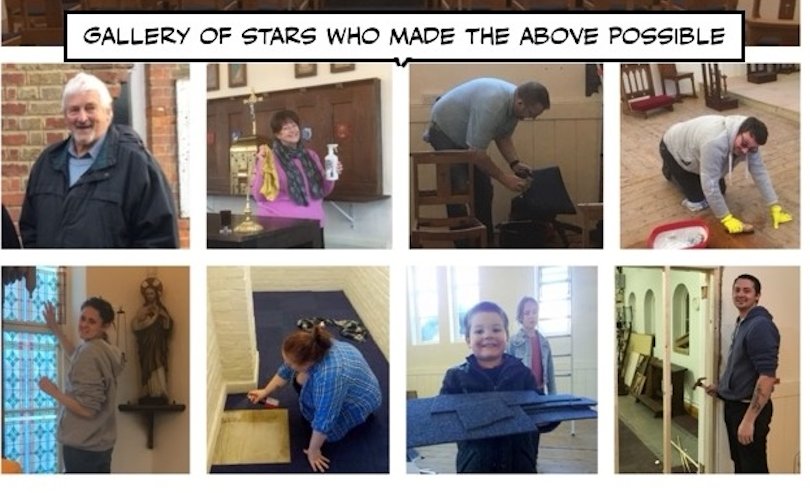 Service of Blessing and Dedication

On Saturday 26th May 2018 the Pro Cathedral Church of Saint Augustine, Painters Forstal, Faversham, had our Patronal celebration. Before Mass we asked Gods blessing upon the Church and formally dedicated it to our Patron, St Augustine of Canterbury, on this his Feast Day. We welcomed members, friends and guests. The Bishop Damien celebrated Mass and after a buffet lunch in the Fyfe-Graham Room the Archdeacon, Fr Raymond Thompson, officiated at Benediction, at which the Bishop gave a devotional address on the Eucharist. 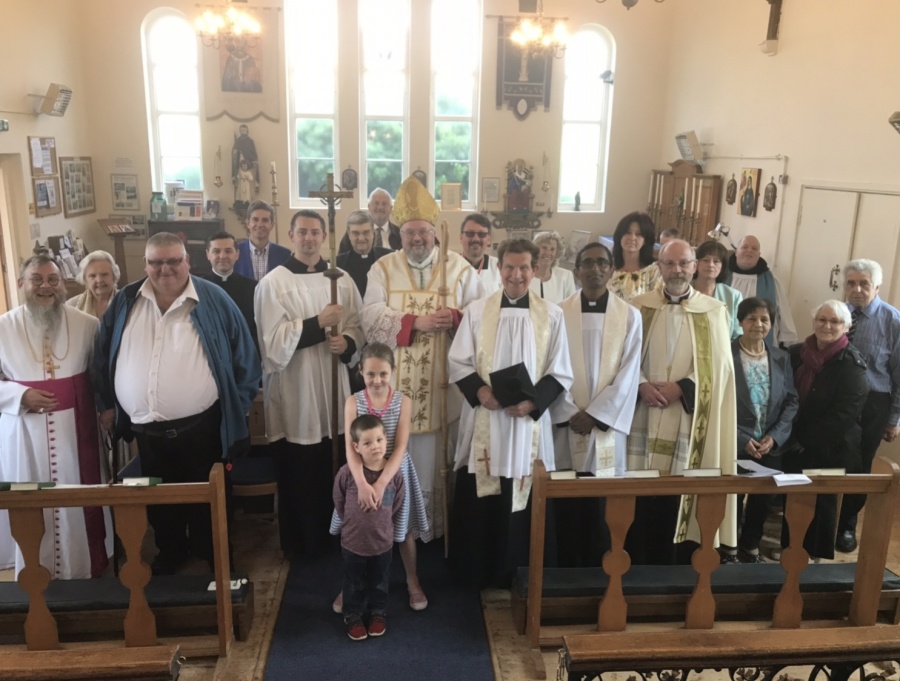 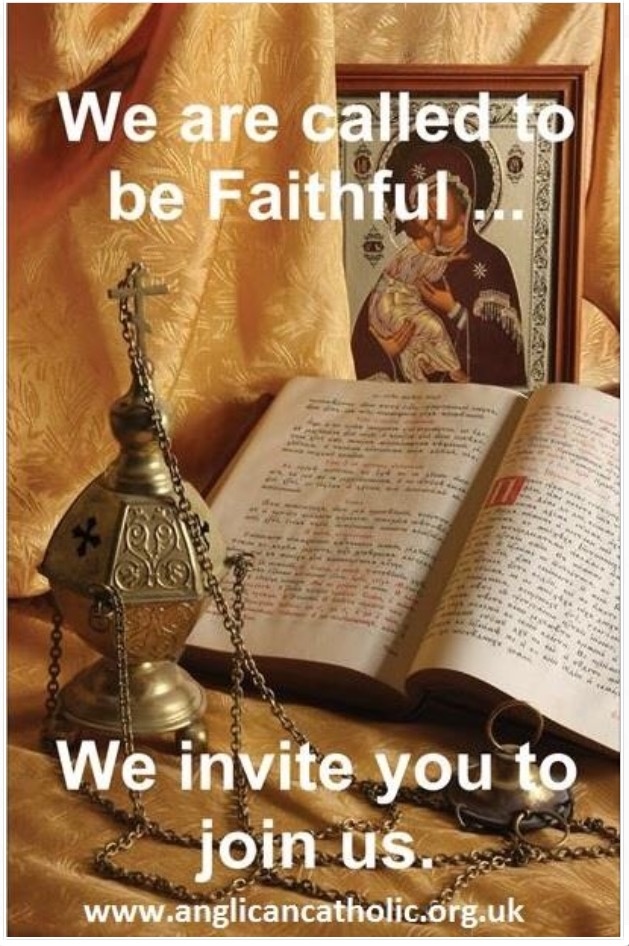 As a finishing touch to the internal refurbishment of the Church building attention turned in 2021 to the windows. Ordering replacement frames for 4 of the windows which were in considerable bad way, on a limited budget, faux stained glass panels, depicting the life of Christ were chosen and ordered by Bishop Damien and inserted in the windows down both sides of the Church. 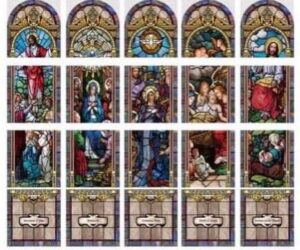 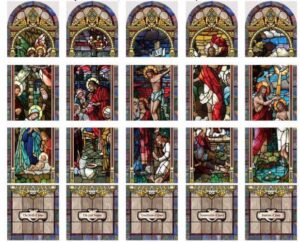 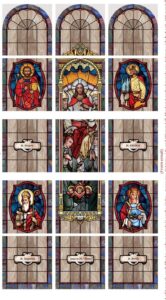 The central “West End” windows were added later. These depict, around a central image of Christ in Glory, four Saints closely connected to the story of St Augustine of Canterbury, our patron. The top left is St Gregory the Great, bottom left is St Augustine himself, top right St Ethelbert, the King of Kent who welcomed our patron to his Kingdom and bottom right St Bertha, Queen of Kent, who was already a Christian and encouraged the establishment of the new Mission in Kent. Two windows designed at the same time as the side windows were installed before the central windows on the West Wall, in each corner. They depict the Death of St Joseph and, in the Lady Chapel area, the Coronation of Mary, Queen of Heaven. 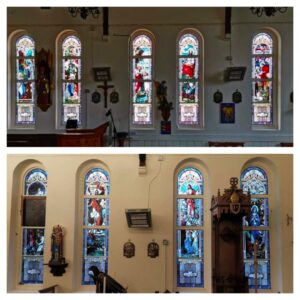 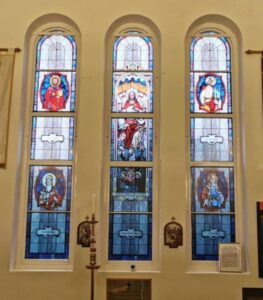 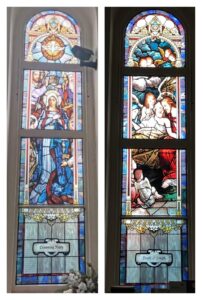 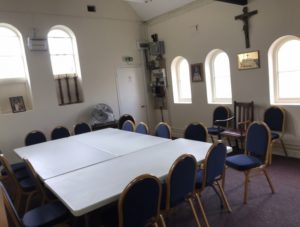 St Augustine’s is blessed with a small parish or meeting room, with an attached kitchen and WC and washroom facilities.

The meeting room was blessed and dedicated to the glory of God and in memory of Arthur and Eileen Fyfe-Graham whose generous bequest made the purchase of the building possible.

It has been used for a number of functions and is also used to serve tea and coffee after many of our services at St Augustine’s.

There is also a small Children’s Corner in the Parish room. However that 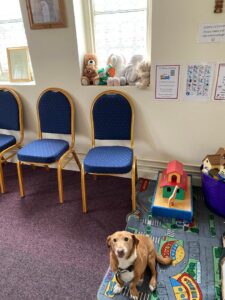 doesn’t mean children are confined to that small space. We welcome them to come to our services.

If you are the parent of young children we want you to especially feel welcome.

Relax! God put the wiggle in children; don’t feel you have to suppress it in God’s house. All are welcome! Sit toward the front where it is easier for your little ones to see and hear what’s going on at the altar. They tire of seeing the backs of others’ heads.
Quietly explain the parts of the Mass and actions of the priest, servers, choir, etc.
Sing the hymns, pray, and voice the responses. Children learn liturgical behaviour by copying you.

If you have to leave the service with your child, such as to use the toilet in the Parish Room, feel free to do so, but please come back. 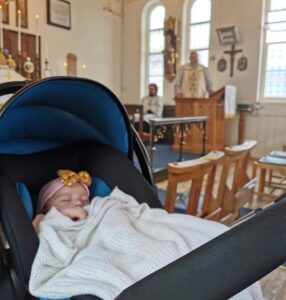 As Jesus said, “Let the little children come to me.” Remember that the way we welcome children in church directly affects the way they respond to the Church, to God, and to one another. Let them know that they are at home in this house of worship.

TO THE MEMBERS OF THIS CHURCH  The presence of children is a gift to the Church and they remind us that our church is growing. Please welcome our children and give a smile of encouragement to their parents.

The Fyfe-Graham Parish Room is also home to the Father Timothy Perkins Library. 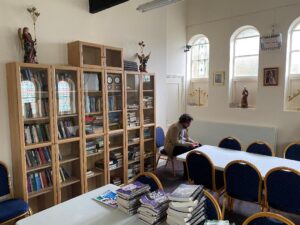 The Diocese began to assemble books for a library of theological books in memory of the late Father Timothy James Perkins (21.04.62 – 04.08.11)  Fr Perkins was Curate at the Church of St Alban the Martyr, Salford, Greater Manchester. His loss is still keenly felt by the Parish and the Diocese of the United Kingdom.

The Library is primarily intended to assist those preparing for ordination and clergy within the Diocese in their pre and post ordination study. The Books are currently being catalogued. 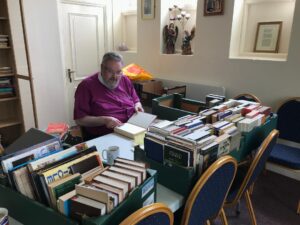 Towards the end of his life, Fr Tim was visited by the Bishop, and he generously bequeathed to the Bishop, on behalf of the Diocese, his theological library.

The Bishop promised that a library would be established in his memory. This move is aimed to fulfil that promise. 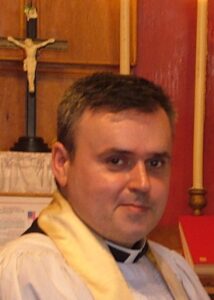 Born on 21st April 1962 in Wolverhampton, Staffordshire, Fr Tim attended St Peter’s Collegiate School, Compton Park, Wolverhampton from 1974 to 1980. He gained a Diploma of Higher Education in 1984 and the BA (Honours) Degree in Humanities from the University of Wolverhampton in 1985.

From 2002-2006 he served as an Elected Councillor representing Claremont Ward on Salford City Council. He was also a School Governor and a Member of the Royal Hospitals NHS Foundation Trust.

Fr Tim was made a deacon on 24th April 1994 within the Traditional Anglican Communion (TAC) by The Most Revd Louis Falk. Between 1999 and 2001 he ministered within an Old Catholic Jurisdiction returning to Traditional Anglicanism in 2002 and was made a priest on 1st May 2004 within the Traditional Church of England by The Most Revd Michael Newman. He served as Priest in Charge of the Mission of St George, Stretford, Manchester.

Fr Tim was a valued member of the house of clergy within the ACC Diocese of the United Kingdom. A man of prayer and deep faith who displayed great fortitude and grace during the last few months of his life. He is deeply missed by the people he served at St Alban’s, his brother clergy and his Bishop. Please pray too for his family and friends in their loss.

+ Rest eternal grant unto him O Lord, and let light perpetual shine upon him. Amen.